Memorial for the Nazi Victims of Oberursel 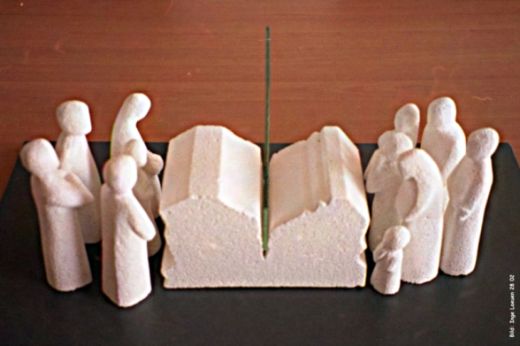 Memorial for the Nazi Victims from Oberursel

The purpose of the memorial for the Nazi victims from Oberursel is to give the victims a face, to name them and bring them out of anonymity. The impulse came from Ernst Röder, son of an Oberursel resident murdered in Auschwitz. He wanted a place to commemorate his mother in his hometown. 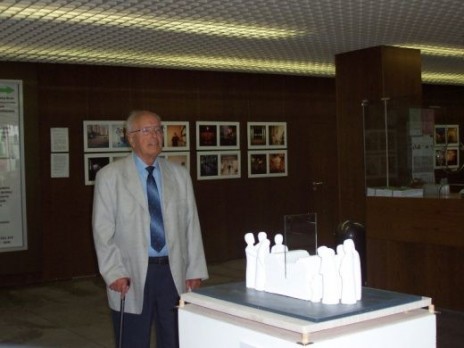 Ernst Röder (died in 2007), whose mother was murdered in Auschwitz, at Oberursel city hall in May 2006, introducing a model of the memorial to the public. Photo: Eberhard Laeuen

Ernst Röder’s parents in front of their house on Siemensstraße, Oberursel.

Röder’s idea was picked up by the working group “Nie wieder 1933” (Never Again: 1933), a politically independent alliance of all interested organizations in Oberursel, A public design contest was held for the victims’ memorial, which should become a place of commemoration and warning. Finally, the working group chose a location next to the Hospital Church in the historic center of Oberursel.

The location of the memorial

A jury chose the design by Juliane Nikolai (a student at Oberursel Gymnasium) among 50 proposals presented to them. The jury consisted of representatives from the neighborhood of the memorial, youth, culture, the local historical society, Oberursel’s town hall, the working group “Nie wieder 1933”, and the society for “Christian-Jewish Cooperation in the Upper Taunus Region”. The sculptress Christine Jasmin Niederndörfer turned the sketch into a model. 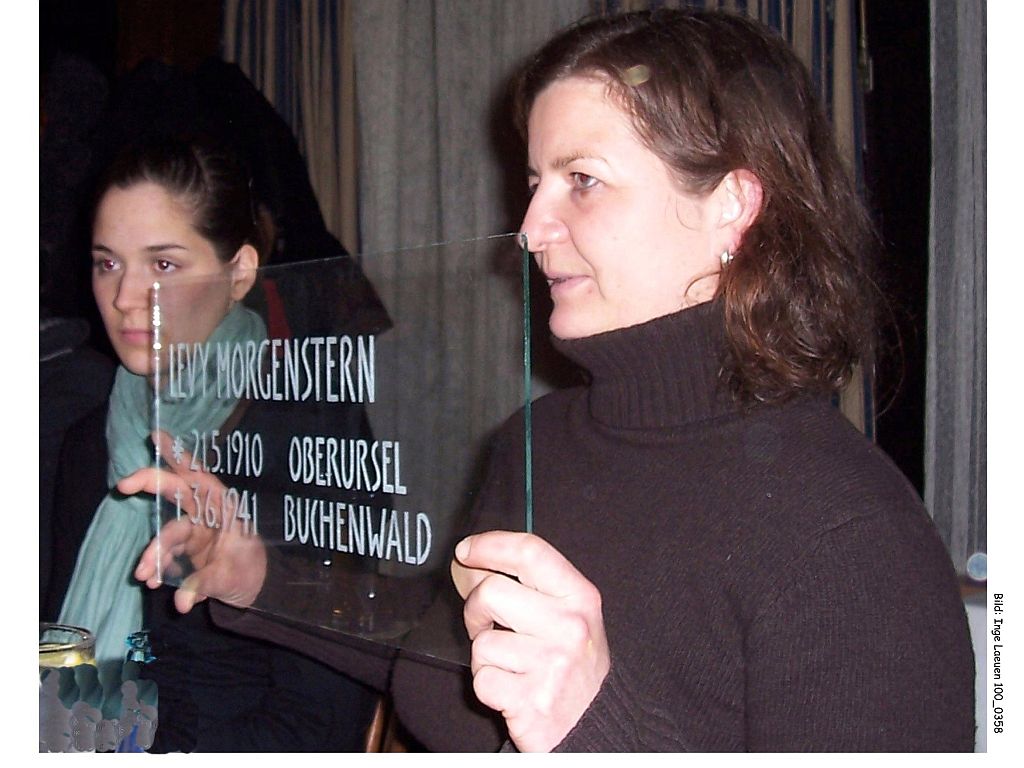 Two groups of figures are separated by a transparent glass pane set in a block of stone (Bavarian Jurassic limestone). The two groups face each other and represent the society on the one hand and the persecuted individuals on the other.

The glass pane will be inscribed with the names of Oberursel’s victims with dates and locations (if available) for both: birth and death.

The visitor is encouraged to circle around the memorial and view both perspectives (the victims’ and the segregators’).

The project was made possible exclusively by private initiative. Mayor Hans-Georg Brum said at the ceremony for introducing the second figure: “The idea is a citizen initiative and funded by citizens.”

There is still a long way to go until the memorial with its ten figures and the inscription of all names on the glass pane is completed.

The working group “Never Again: 1933” relies on private sponsors and is involved in various events to collect donations for the memorial.

It has been decided to develop the memorial step by step. The town hall supports the initiative by establishing a bank account for donations. A society named “Initiative Opferdenkmal e.V.” (Initiative Victims’ Memorial) was founded.

The first phase of construction was commissioned mid 2007.

A ceremony took place in Hospital Church on December 10, 2007 to inaugurate the first part of the memorial, the middle piece and the first figure. 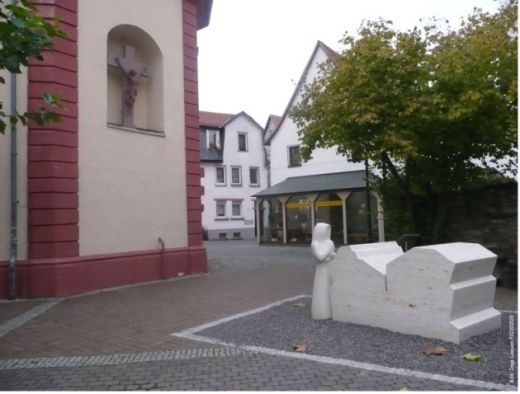 December, 2007: The first part of the memorial, the middle piece and one figure. Photo: Inge Laeuen 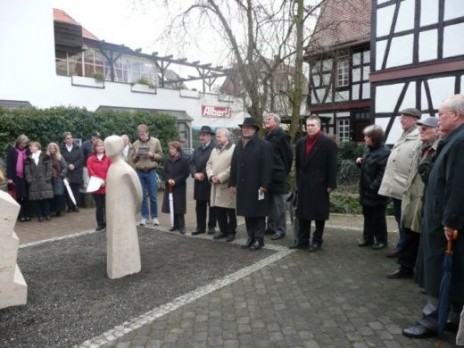 Initiative for a Victims’ Memorial

The society “Initiative for a Victims’ Memorial” emerged from the working group “Never Again: 1933” and, according to its statutes has the goal “… to build a memorial for the Oberursel citizens who were murdered through persecution by the national-socialist
dictatorship.” The society also took on the task of researching and documenting the political context and the victims’ fates.

The society pursues an exclusively charitable cultural purpose as stipulated in the paragraph ‘tax-privileged purposes’ of the German fiscal code and is recognized as such. We ask for your support. Donations can be made via the following bank account:

Further information about the memorial, the working group “Never Again: 1933” and the society “Initiative Victims’ Monument” can be found in the internet:
www.opferdenkmal-oberursel.org